And in the matter of decisions of the Department of Justice

The Applicant was refused an oral hearing in respect of the refusal of emergency legal aid. The Applicant now seeks a declaration that specific regulations within The Civil Legal Services (Appeal) Regulations (Northern Ireland) 2015 are procedurally unfair, unlawful, ultra vires and of no force or effect.

In all the circumstances of the case it is submitted that the decisions of the Respondent to refuse the Applicant’s appeal and to refuse his request for an oral hearing, were irrational, unlawful and unfair. It is also said that Regulations within The Civil Legal Services (Appeal) Regulations (Northern Ireland) 2015  breach Article 6 of the ECHR by failing to give individuals appealing a refusal of an emergency application for civil legal aid an absolute right to an oral hearing.

This is a case of huge public interest. The case raises complex human rights issues and ultimately it brings to the fore the notion of access to justice. The case will proceed to full hearing early next year.

McIvor Farrell have now commenced a claim for compensation against the Ministry of Defence, PSNI and British Government in relation to allegations of Torture and Inhuman and Degrading Treatment on behalf of a client who was arrested, interned and subjected to the most horrific conditions of detention in the early 1970s. The Plaintiff was held without Trial and during his time in custody was subjected to numerous beatings, sleep deprivation and thrown from an Army helicopter blindfolded as it hovered above the ground.

Solicitor Conor Woods has described it as a “landmark case that will have far reaching consequences for those who suffered greatly at the hands of State Forces during the recent conflict in Northern Ireland” and has encouraged others to come forward so that these past wrongs may be addressed.

If you, or any family member, has suffered as a result of  State violence during the conflict in Northern Ireland please contact us for a no obligation free consultation with one of our legacy solicitors without delay.

Under cross examination from McKay Snr’s defence solicitor Paul Farrell, the officer accepted that he had been captured on CCTV at another location at the time of the shooting but still maintained that he remains as a suspect.

The officer also conceded that Mr Gavin had made similar allegations of threats to kill against his father in law about a year ago but that McKay Snr was not prosecuted for it and that he had been on police bail for a considerable period before the case was dropped.

Mr Farrell suggested to the detective that police had no evidence to link McKay Snr to the calls as they had been made from withheld numbers but DS Hawthorne refused to accept that, telling the lawyer his daughter and son in law had identified his voice.

McKay Jnr’s solicitor Daniel McCorry submitted that with an alibi for the shooting and with a completely clear record, his client was also a suitable candidate for bail and revealed that despite police failures to locate his mobile phone, he had told them where it was and the passcode for it.

We recently settled a claim for significant value against the Sunday Life Newspaper in relation a Defamation Action taken on behalf of a client wrongfully identified as being involved in a murder.

Proceedings were robustly defended but ultimately the matter was settled on favourable terms and a full apology was given to the Plaintiff. In complementing McIvor Farrell the Plaintiff said

“I felt (your) staff, throughout the whole process, dealt with my case professionally and efficiently at all times”

“From the very first introduction meeting to the conclusion I believe that I was given excellent and clear advice. I also felt supported and that I had someone on my side throughout this difficult time and throughout the negotiations to reach final settlement”

We were delighted to have been of assistance in this difficult and emotionally demanding case. If you feel that you may have been defamed please contact our litigation experts without delay.

McIvor Farrell Solicitors have been made aware of attacks made on other Solicitor Firms’ IT Systems in order to defraud clients out of money from their bank accounts. We can reassure all clients that our IT Systems are completely up-to-date with Firewalls and Ant-Virus Software and that we have not fallen prey to any attempted fraud.

However for the sake of clarity, we will never ask you to provide your bank account details to us via email nor will we ever send you an email with our account details asking you to deposit monies into it. If you have any concerns in relation to any email received from us please alert us to your concerns immediately. 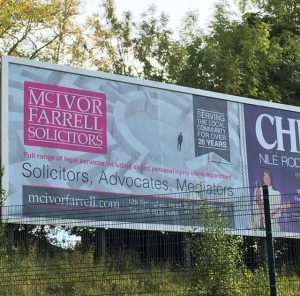 We are very pleased with our targeted marketing campaign in the Greater Belfast area. We have a strong reputation within the community for a wide range of legal services but our current campaign focuses on our strengths in personal injury compensation claims.

We are delighted with our current marketing strategy in association with Clear Channel. As a business with over 20yrs experience in compensation claims we can be trusted to ensure the best results in each case.

McIvor Farrell Solicitors Limited are proud to support the latest Campaign from the “Will to Give” Charity.

“Will to Give” is a consortium of some of Northern Ireland’s most cherished Charities who have come together to promote charitable gifts in Wills. Member Charities cover a broad range of causes and are off ever size and scale. “Will to Give” has grown considerable from its inception in January 2011 and today has 45 active Charity Members whose representatives meet on a monthly basis.

The people of Northern Ireland are extremely generous in showing their support for good causes and do so in many ways. It often comes as a surprise therefore that only 3% of the people in Northern Ireland who make a will leave a gift to Charity. “Will to Give” is working to increase the number of gifts made to charity in this way and we at McIvor Farrell are pleased to support their efforts by making all of our clients aware that giving to charity in their will is an option.

If you are thinking of making a will, please feel free to contact our Probate Department who will be happy to advise you of your options.

Remember our initial consultation is free so call today.

McIvor Farrell are delighted to have been chosen by International Global Law Experts (GLE) as their Editors choice for the “Regional Criminal Defence Firm” of the year in Northern Ireland.

Earlier this month the awards panel convened and the winners were selected. The shortlisted firms were judged on client testimonials, key cases, legal rankings, overall reputation, publication contributions, speaking engagements and the performance and standing of teams and individual lawyers.

During the recommendations stage GLE received over 100,000 responses from business directors, in-house legal counsel, independent law firms, high net-worth individuals, bar associations, visitors to the GLE website and LinkedIn users. These recommendations were combined with GLE’s own independent research in order to create a shortlist for each award.

“This is the second time we have been internationally recognised for our Criminal Defence standards. It is an honour for us to be listed amongst the premier Criminal Defence Firms in Northern Ireland but to win this prestigious award underscores our commitment to client care and cutting edge knowledge of the law which ensures the best achievable outcomes for our clients.”

On 29th April 2015 McIvor Farrell Solicitors Ltd underwent a full reassessment of our LEXCEL accreditation which was first obtained in 2012. The assessment involved an on-site audit by an independent assessor across all a

spects of our practice. At the conclusion of the 2 day assessment we were delighted to have succeeded once again in attaining the high standards required for our LEXCEL accreditation.

LEXCEL is the Law Society’s legal practice quality mark for excellence in legal practice management and client care. Not all Solicitors achieve accreditation and we are among the few who do in Northern Ireland. LEXEL provides a robust management framework to help legal practices develop consistent operational efficiencies and deliver client services at the highest level.

Our LEXCEL Coordinator, Ciaran Maguire, said “At McIvor Farrell we believe it is vital to manage the quality of our legal services effectively. A quality management system that is independently assessed demonstrates our commitment and ability to constantly deliver services that meet and exceed client expectations. We will continue to demonstrate the commitment required to achieve the LEXCEL standard going forward to 2016 and beyond”.

Mc Ivor Farrell as part of their ongoing commitment to assisting in the development of the legal profession in Northern Ireland are pleased to announce that the recipient of the McIvor Farrell Prize for the Best Performing Student at the Institute of Professional Legal Studies in the Negotiation Category is Niamh Hargen.

Our Student Outreach Director Paul Farrell said “It’s a great honour for us to have an ongoing close association with the Institute of Professional Legal Studies and to be involved now for many years in the Annual Prize giving Ceremony. The McIvor Farrell Negotiation Prize recognises the most outstanding student in the area of complex negotiations and Niamh is a well deserving recipient. We wish her continued success as a solicitor in the years to come.”